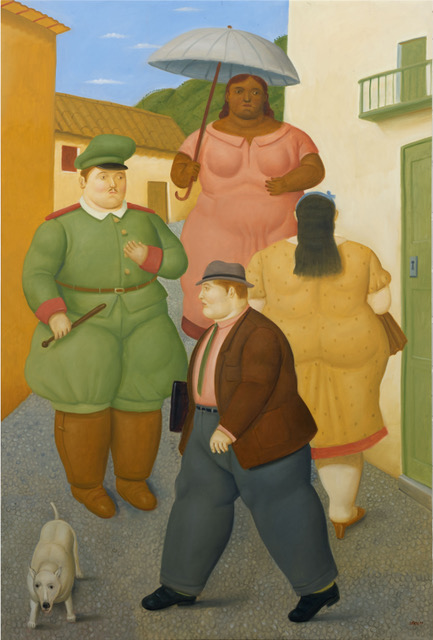 People in the Street

“Creative freedom is in the improbable things” says Botero. Although he has always declared himself a follower of Renaissance, his distance from the academic proportions and his subversion to perspective have allowed him creating his own universe.

In People in the street we can not only understand this aspect of his creation. The monumentality is evident in the fact that the variation of the characters exalts the dimensions of one over the other. The narrow stage of a village street serves as an excuse for Botero to show his own human anatomy seen from four different perspectives: a firm and elegant police/military in his uniform; the man in profile who seems to move quickly towards his work; and the women seen from the front and from the back show us in a single image all the directions in which the body can be seen.

This website uses cookies to improve your experience while you navigate through the website. Out of these cookies, the cookies that are categorized as necessary are stored on your browser as they are essential for the working of basic functionalities of the website. We also use third-party cookies that help us analyze and understand how you use this website. These cookies will be stored in your browser only with your consent. You also have the option to opt-out of these cookies. But opting out of some of these cookies may have an effect on your browsing experience.
Necessary Always Enabled
Necessary cookies are absolutely essential for the website to function properly. This category only includes cookies that ensures basic functionalities and security features of the website. These cookies do not store any personal information.
Non-necessary
Any cookies that may not be particularly necessary for the website to function and is used specifically to collect user personal data via analytics, ads, other embedded contents are termed as non-necessary cookies. It is mandatory to procure user consent prior to running these cookies on your website.
SAVE & ACCEPT